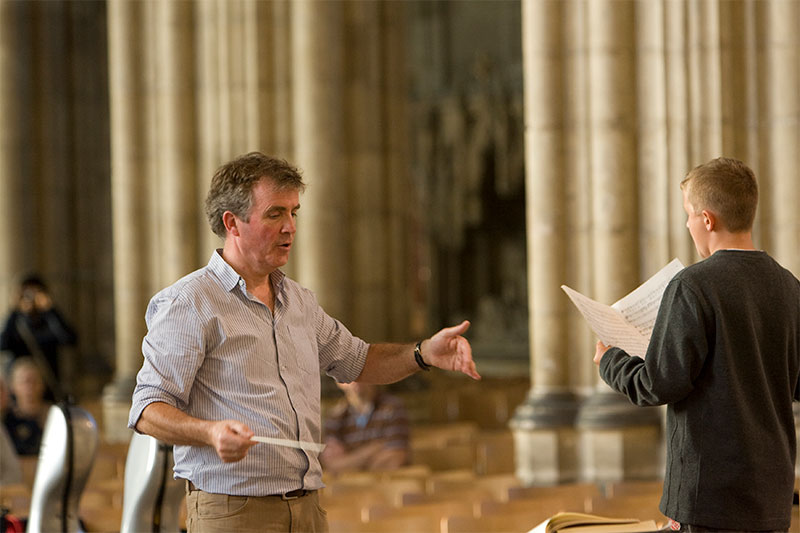 Richard Cooke marked his 30th year as Music Director of Canterbury Choral Society on June 21st 2014 with the performance of Beethoven’s Missa Solemnis, together with the Royal Philharmonic Orchestra.

A significant recent addition to his work in Canterbury is the creation of the CCS Youth Choir. They have distinguished themselves over the past five years in performances of Britten War Requiem and St. Nicolas, Bach St. Matthew Passion, Elgar The Dream of Gerontius and The Kingdom, Rachmaninov The Bells, Prokofiev Alexander Nevsky and Mozart Requiem and Coronation Mass. The Youth Choir is an important development in Canterbury Choral Society’s aim to include young singers in high-quality music making.

Richard Cooke has also been Music Director of the Royal Choral Society for 19 years, and The University of Essex Choir for 33 years. He was a boy chorister of St. Paul’s Cathedral and later sang as a Choral Scholar in the choir of King’s College, Cambridge. He was Conductor of the London Philharmonic Choir for ten years from 1982, working with the world’s leading conductors including Haitink, Muti, Mehta, Solti and Klaus Tennstedt.

He has appeared many times in the concert halls of London, Birmingham, Manchester, Liverpool, Snape Maltings (conducting the first ever performance there of Britten’s War Requiem), Belfast and Dublin. Richard has conducted many of the country’s leading orchestras in the cathedrals of Peterborough, Winchester, Salisbury, Norwich, St. Edmundsbury and Rochester.

Born in Cornwall, he returns there each summer for his favourite outdoor activity, body-surfing off the North Cornish coast. He also enjoys cycling and hill walking (climbing Munros and equivalents) in Scotland and Wales.

On Wednesday 5 November 2014 at 6pm Richard Cooke talked to Suzy Klein on BBC Radio 3 In Tune about Britten’s War Requiem and its enduring poignancy.
This was ahead of a very special performance of Britten’s War Requiem at the Royal Albert Hall on Remembrance Sunday, which featured Bryn Terfel and Ekaterina Scherbachenko with the London Philharmonic Orchestra and the Royal Choral Society.
BBC R3 In Tune: Wihan Quartet, Richard Cooke, Tomasz Lis
https://twitter.com/BBCInTune/status/530042199774601216