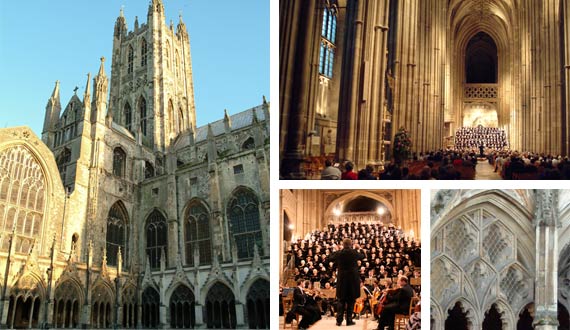 Canterbury Cathedral is the venue for three Canterbury Choral Society concerts a year plus our annual Family Carols service.
See our upcoming concerts →

TOILET FACILITIES
There are toilet facilities on the south-east side of the Cathedral and they will be open during the performance.

THE QUENINGATE
The Queningate will be open after the performance until the audience has departed, so that patrons may return to their cars in the Broad Street car park.

The history of Canterbury Cathedral at a glance

The cathedral’s first archbishop was Augustine of Canterbury. He was sent by Pope Gregory the Great in 596 as a missionary to the Anglo-Saxons and he founded the cathedral in 597. The cathedral is one of the oldest and most famous Christian structures in England and is part of a World Heritage Site. The Archbishop of Canterbury is leader of the Church of England and symbolic leader of the worldwide Anglican Communion. Its formal title is the Cathedral and Metropolitical Church of Christ at Canterbury.

Founded in 597, the cathedral was completely rebuilt from 1070 to 1077. The east end was enlarged at the beginning of the twelfth century and largely rebuilt in the Gothic style following a fire in 1174 with eastward extensions to accommodate the flow of pilgrims to the shrine of Thomas Becket, the archbishop murdered in the cathedral in 1170. The Norman nave and transepts were demolished in the late fourteenth century when they were replaced by the present structures.