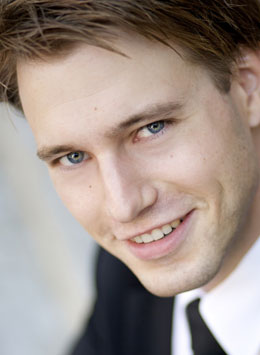 In 2011, Benjamin Appl made his debut at Berlin State Opera ‘Unter den Linden’ singing Baron Tusenbach in Peter Eötvös’s Tri sestri, followed by King in Orff’s The Story of the King and the Clever Young Woman at the Carl Orff-Festival Andechs, Chevalier des Grieux in Massenet’s Le portrait de Manon and Bustamante in Massenet’s La Navarraise at Lodon’s Silk Street Theatre in 2012, where he returned in 2013 for his first Conte Almaviva in Mozart’s Le nozze di Figaro and the title role in Britten’s Owen Wingrave. At Aldebourgh Festival 2013, he made his debut as Aeneas in Purcell’s Dido and Aeneas.

The lyric baritone received his musical training with the famous Regensburger Domspatzen. He studied with Edith Wiens and Helmut Deutsch at the Hochschule für Musik und Theater in Munich as well as at the Bayerische Theaterakademie August Everding until 2010. Since 2010/2011 he refined his studies at London’s Guildhall School of Music & Drama with Rudolf Piernay and worked in master classes with Brigitte Fassbaender, Christian Gerhaher, Thomas Hampson, Margreet Honig, Malcolm Martineau, Denise Massé, Ann Murray, Peter Schreier and Brian Zeger. Benjamin Appl joined “Young Songmakers’ Almanac”, won a scholarship of the prestigious Samling Program in the UK in 2011 and of the International Festival Heidelberger Frühling Lied Academy in 2012. He has had the great fortune to be mentored for years by Dietrich Fischer-Dieskau until his death in May 2012.

In 2002, Benjamin Appl was awarded a Special Prize by the Bavarian Broadcasting Corporation „for his outstanding interpretation of a 20th Century’s Work“, he won a Dieter-Ullrich-Music-Promotion in Munich as well as a scholarship by the Richard-Wagner-Association. In 2003, he was a prize winner of the Bundeswettbewerb „Jugend musiziert“. Since 2007, Benjamin Appl holds a scholarship by the ‘Studienstiftung des deutschen Volkes’ and, since 2008, he is promoted by the Yehudi-Menuhin-Foundation „Live Music Now“. In 2012, he was awarded the Schubert Prize by the Deutsche Schubert-Gesellschaft.

Benjamin Appl was soloist in a service held by Pope Benedikt XVI. in Regensburg on the occasion of his apostolic visit to Bavaria in 2006, broadcasted live worldwide. In 2010, Benjamin Appl made his US debut at the Ravinia Festival, took part in the opening concert of the Days of Early Music Regensburg, performed Handel’s Messiah in Paris, Handel‘s Samson in Augsburg and sang Mahler‘s Lieder eines fahrenden Gesellen on a tour of Germany. He has sung at festivals including at Bachwoche Stuttgart, Sommerakademie Salzburg, Europäisches Musikfest Stuttgart, Ravinia Festival and at the Zurich Bachtage.

The baritone has performed a wide operatic repertoire „with a highly lyrical baritone“ [Opernwelt, April 2010]. In opera and concerts Benjamin Appl performed with ensembles including Akademie für Alte Musik Berlin, Arsatius Consort, Bach-Collegium Stuttgart, Bach Collegium Zurich and the „Ensemble aperto“ of the International Bach Days Halle, as well as with members of the Bavarian State Orchestra, Munich Rundfunkorchester, Staatskapelle Berlin and members of the Munich Philharmonic. He worked with conductors including Christian Curnyn, Michael Hofstetter, Christoph Poppen, Julien Salemkour and Ulf Schirmer.

A recognized recitalist, Benjamin Appl regularly performs with pianist Graham Johnson – in 2012 at deSingel in Antwerp, Piano Festival Ruhr and with the BBC London. In 2010, he made his U.S. debut at the Ravinia Festival with Beethoven’s An die ferne Geliebte, a cycle he sang at the International Heidelberg Spring Festival in 2011, the year he sang Mahler Lieder in a concert series by the Berlin Philharmonic. In 2012, he introduced himself with Schubert’s Die schöne Müllerin at Berlin and with Wolf’s Italian Songbook at Rheingau Musik Festival. In 2013, he returned to deSingel Antwerp for further Schubert recitals with Graham Johnson and made his debuts at London’s Wigmore Hall and at Schubertiade Hohenems, where he will return in 2014.

A CD recording for Oehms Classics as well as many live broadcasted concerts document Benjamin Appl‘s artistic skills – a Mendelssohn recording with Malcolm Martineau will follow in 2013.