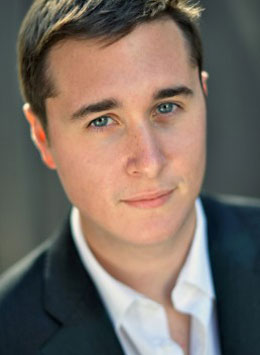 Bradley has recently graduated in music from St John’s College, Cambridge, where he held a choral scholarship and studied with David Lowe. Here he was appointed to a two-year post as the Musical Director of the internationally renowned a cappella ensemble The Gentlemen of St John’s. Bradley was heavily involved in a variety of Cambridge concerts, collectively in ensemble, and as a soloist, including Mozart’sCoronation Mass, Rachmaninov’s Vespers, Bach’s St Luke Passion, and a one-to-a-part Bach St Matthew Passion under the leadership of Margaret Faultless. He also featured as a soloist for the performance of various Bach Cantata’s, accompanied by members of the Orchestra of the Age of Enlightenment.

To wide acclaim, Bradley made his operatic début as Don Basilio in the CUOS mainshow production of Mozart’s The Marriage of Figaro. He also played the part of Pièrre the Scholar in Holst’s The Wandering Scholar. He is now embarking on a two-year Master’s degree in vocal performance at the Royal Academy of Music where he studies with Ryland Davies and Audrey Hyland. Recent performances include Schumann’sLiederkreis Op. 39, the Aria soloist in Bach’s Christmas Oratorio at St John’s, Smith Square, both the Evangelist and Aria soloist in Bach’s St John Passion, tenor soloist in Handel’s Solomon, and soloist in a concert of the music of Henry Purcell at the Cadogan Hall. Bradley recently understudied the principal role of Tamino for the last season’s production of Mozart’s Die Zauberflöte at Longborough Festival Opera, after which, he performed the full role for the Young Artists’ Tour.  He also played the role of Buff in a new production of Mozart’s The Impresario at the Edinburgh Festival. Bradley is soon to play the title role of Bastien in Mozart’s Bastien und Bastienne, and will be performing Schubert’s Die Schöne Müllerin at the Royal Academy of Music. He is extremely grateful to the Josephine Baker Trust for their continued support.