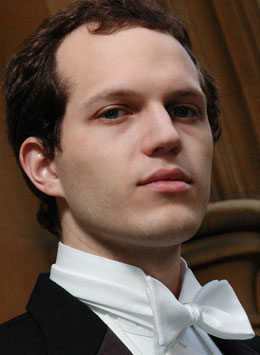 David Allsopp was a choral scholar and subsequently lay clerk in the Choir of King’s College, Cambridge where he also obtained a degree in computer science. After leaving King’s, he spent three years in Westminster Cathedral Choir, leaving in 2008 to pursue a freelance career. In addition to frequent solo engagements, he continues to sing with London-based consort groups including Tenebrae, Polyphony and The Gabrieli Consort.

David has appeared as a soloist for many of Handel’s oratorio works, ranging from the well-known Messiah and Israel in Egypt through to less-performed works such as Joshua and Solomon. Last year he appeared in the opening concert of the London Handel Festival taking the role of Daniel in Handel’s Belshazzar’s Feast and before Easter gave a series of Bach’s St Matthew Passion concerts, first here with Canterbury Choral Society and then in Holland with the North Netherlands Orchestra.

While the countertenor’s repertoire is principally baroque, David makes occasional forays into more modern repertoire. He made his debut at the BBC Proms last year singing in the Evangelist quartet for Arvo Pärt’s Passio and in 2009 gave performances of Bernstein’s Chichester Psalms in Strasbourg with Wayne Marshall and Strasbourg Philharmonic Orchestra. He will be collaborating with Wayne Marshall again later this month making a less pleasant noise as the dying swan in Orff’s Carmina Burana in Milan. Other performances this year include many performances of Bach’s St. Matthew Passion, his Mass in B minor with Rochester Choral Society, and Handel’s Messiah with Bournemouth Symphony Orchestra.