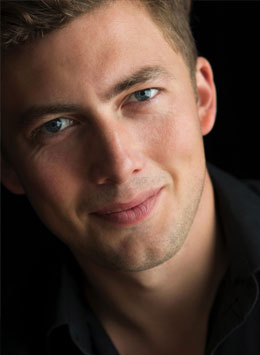 British baritone Dominic Sedgwick joined the prestigious Jette Parker Young Artist Programme at the Royal Opera House at the beginning of the 2017/18 season, having recently graduated from the Guildhall School
of Music and Drama’s Opera School where he studied with Robert Dean. He previously read Theology at Clare College, Cambridge.

He made his Royal Opera House debut as Marullo in Verdi’s Rigoletto in December, and has since performed the roles of Second Nazarene in Strauss’s Salome, and Moralès in Barrie Kosky’s new production of Carmen.

This March he will perform as Ghost Child in the world premiere of Coraline by Mark-Anthony Turnage at the Barbican Theatre. He was recently announced as an Askonas Holt Rising Star and also received the Audience Prize at the inaugural Grange International Singing Competition.

During his studies, Dominic was a Samling Artist and a Britten Pears Young Artist. He joined the Glyndebourne Chorus in 2017, also performing Flora’s Servant in Verdi’s La Traviata and Harlequin (cover) in Strauss’s Ariadne auf Naxos. In March 2017 he created the role of Damyan in the world premiere of Julian Philips’ The Tale of Januarie for GSMD.

Dominic made his debut at the Royal Albert Hall with Richard Cooke and the Royal Choral Society, and will appear regularly in recital with the JPYA programme, including a performance of Wolf’s Italienisches Liederbuch in May 2018.