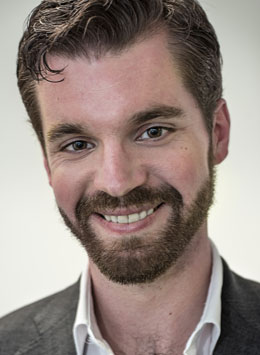 British bass baritone Edward Grint is a recent graduate of the International Opera School at The Royal College of Music (RCM) and a former choral scholar of King’s College, Cambridge. Edward was awarded the top prize at the 24e Concours Lyrique in Clermont Ferrand in 2015, second Prize at the 3rd International Singing Competition Pietro Antonio Cesti in Innsbruck and was a finalist in the 2014 London Handel Competition.

On the concert platform, Edward has performed in many of the UK’s major concert venues including the Royal Albert Hall (Handel’s Messiah), Hereford Cathedral (Beethoven’s Missa Solemnis with the Philharmonia), Wigmore Hall (Bach Cantatas with The King’s Consort) and St Paul’s Cathedral (St John Passion).

This season, plans include the roles of Polyphemus in Acis and Galatea in Ghent and Seggeste in Handel’s Arminio in Göttingen. He is also performing Bach’s St John Passion with Marc Minkowsk, Handel’s Messiah on tour with the Hanover Band and Bach’s B Minor Mass with the Gabrieli Consort. He will be making his debut at the Salzburg Festival in the summer of 2018 in Mozart’s Mass in C minor.