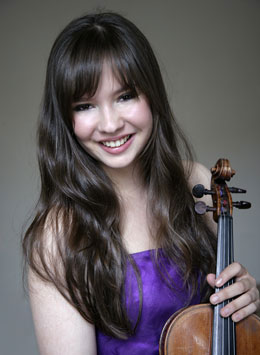 The fourth generation of a musical family, Juliette was born in London and began her violin studies at the age of 5. Her musicality was quickly recognised with a first prize at the North London Music Festival and she later joined the Royal Academy of Music, Junior Department. In addition to violin and piano, Juliette played ‘cello for five years and was the youngest finalist in the 2005 Independent Schools’ Young Musician of the Year competition.

In 2006, Juliette’s family re-located to Singapore, during which time she elected to focus her musical talents with the violin. Juliette played regularly in solo and chamber music concerts as well as enjoying her first performance with full orchestra. During school vacations, Juliette joined music festivals in England, the Netherlands and USA.

In 2008, Juliette won entry to the Yehudi Menuhin School to pursue her music centred education, studying with Professor Lutsia Ibragimova. Recent performances have taken her to Italy, France, Taiwan as well as chamber music recitals at the Wimbledon International Music Festival and the Wigmore Hall, London. Juliette’s performances in the BBC Young Musician 2012 contest drew high praise from the Strings Final jury who described her playing as “Absolutely spellbinding” – she was the first placed violinist and won the Walter Todds Bursary Prize.

Other 2013 engagements include the Bruch, Violin Concerto no.1 with City of Southampton Orchestra; Beethoven, Triple Concerto in Wales; and, her graduation recital from the Yehudi Menuhin School at Wigmore Hall, London.