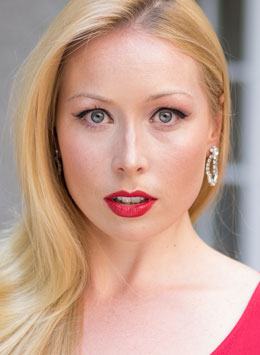 British Soprano Katherine Crompton studied at the National Opera Studio, having previously graduated from the Royal College of Music International Opera School where she was the Independent Opera Scholar. Katherine was the winner of the Harriet Cohen Memorial Prize, the McCullough Prize for Opera and the Miriam Licette Prize. She was also the recipient of a Tutton Award and a Susan Chilcott Award and is a Britten-Pears Scholar.

Katherine has since appeared as a soloist at many opera houses throughout Europe. She has sung for Garsington, Glyndebourne, Independent Opera and has appeared at the Aldeburgh Festival, Festival de Chaise-Dieu and London Handel Festival. Her operatic repertoire includes many Handel roles. She has worked with conductors Richard Egarr, Laurence Cummings, Roland Böer and has sung with orchestras La Nuova Musica, Le Banquet Celeste and the Irish Baroque Orchestra.

Katherine adores the choral repertoire and has appeared as a soloist at many venues throughout the UK, singing repertoire from Bach’s Passions to Will Todd’s Jazz Mass. A passionate recitalist, Katherine has sung at the Oxford Lieder Festival, the Wigmore Hall and has sung Strauss’s Four Last Songs many times. As a keen performer of contemporary music, she recently worked with Harrison Birtwistle, while last year she sang in the world première of David Blake’s opera, Icarus.

Her operatic plans for the 2016/2017 season include her debut at the Royal Opera de Wallonie Liège as Belinda in Purcell’s Dido and Aeneas.

Future plans include a return to Garsington Opera, to France with Le Banquet Celeste to sing Galatea and on tour with Edward Higginbottom and The Instruments of Time and Truth to sing Beauty in Handel’s Trionfo del tempo e della Verita.