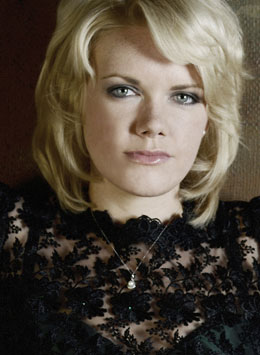 Born in Liverpool, Kathryn completed her studies at the RNCM with Susan Roper in 2011. She was an ENO Young Artist, a YCAT artist (2010-13) and a BBC New Generation Artist until December 2017. She has won numerous prizes and awards including MBF Sybil Tutton Award and Susan Chilcott Scholarship. Kathryn is a Samling Scholar.

Featured as The Times Rising Star of Classical Music 2012, Kathryn made her debuts with Cherubino for ENO and Sesto for Opera North. Her debut recital album, Love’s Old Sweet Song, was released in 2014 and she has featured in a recording of songs by Donald Swann released on Hyperion.

Previous concerts include performances with the RLPO, Philharmonia, Manchester Camerata and BBC Philharmonic. She has given recitals at Wigmore Hall, Bridgewater Hall, the Brighton, City of London and Cheltenham Festivals. She made her BBC Proms début in 2016.

Recent and future operas include Cherubino in Marriage of Figaro for Glyndebourne Touring Opera, Zerlina in Don Giovanni and Hermia in A Midsummer Night’s Dream for Opera North, Dorabella in Cosi fan tutte for Garsington, Rosina in Barber of Seville for ENO and Nancy in Albert Herring for Buxton Festival.

Recent and future concerts include the world premiere of Michael Nyman’s Hillsborough Symphony, The Dream of Gerontius for Rheingau Festival and Easter at King’s Festival, concerts and a recording of the Sea Symphony with the Royal Liverpool Philharmonic and a solo recital at Wigmore Hall.