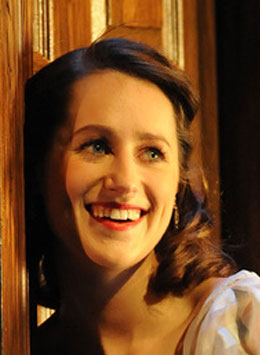 Susanna Hurrell (soprano) was born in London and joined the undergraduate programme at the Royal College of Music in 2005. Having graduated with first class honours, she now studies with Patricia Rozario at the RCM International Opera School, where she is kindly supported by an HR Taylor Trust award.

Susanna has already embarked upon a varied solo career which has seen her in oratorios such as Fauré’s Requiem, Gounod’s Messe Solenelle, Haydn’s Little Organ Mass, Handel’s Alexander’s Feast and Dixit Dominus, Andrew Lloyd-Webber’s Requiem, and Rutter’s Mass of the Children. Notable performances include Haydn’s Nelson Mass and Bach’s Magnificat at St John’s, Smith Square, and Handel’s Messiah with the English Chamber Orchestra at the Cadogan Hall and Reading Hexagon.

Her career extends to both the recital platform and the operatic stage, where her roles include Dido in Purcell’s Dido and Aeneas, Serpetta in Mozart’s La Finta Giardiniera for Opera de Baugé, Papagena in his Die Zauberflöte with the RCMIOS, Rossane in Handel’s Alessandro and Amarilli in Handel’s Il Pastor Fido, both for the London Handel Festival conducted by Laurence Cummings, and Euridice in Offenbach’s Orpheus in the Underworld for the RCMIOS. She looks forward to performing the title roles in Handel’s Rodelinda and Gilbert and Sullivan’s Patience in 2011.

Susanna has recently featured on two CDs: ‘An English Trumpeter’ with works for soprano, piano and trumpet with trumpeter Simon Cheney and pianist Sebastian Wybrew; and Faure’s Requiem, recorded live at the Royal Albert Hall by EMI classics. She also recently won the John Kerr English song competition and the Peter Hulsen award for Orchestral Song, enabling her to perform a recital with the Southbank Sinfonia at the Linbury Studio theatre in May.